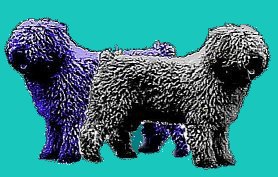 ORIGIN of the SPANISH WATERDOG

There are several different hypotheses on the origins of the Spanish Water Dog, such as RUTIMEYER´S, or the one by DUHEL, The German cinologo or the one by BUFFON, a distinguished naturist.

For those that support the thesis of the African origin of the SWD, such as BUFFON, we would have to look back to the most steemed heritage of the Spanish sheep "The Merino", which might have been introduced in the Iberian Peninsula by the BENI MERINES, a nomadic tribe which replaced the ALMOHADES in the government of the Peninsula. Together with the sheep they might have also introduced the "Careas" ancestors of the SPANISH WATER DOGS.

The fact is that nowadays, there isn't any dog of this typology in the North of Africa which could mean what many enthusiastic of this breed think: The SPANISH WATER DOG is a dog born and "forged" in ANDALUSIA.

To consider the thesis that the SWD is a native breed, we have to look the correlations with the "trunk" of sheep, which flourished in "LA BETICA" (chain of mountains), in a period previous to the Roman control. The handling of these sheep might be done by a "carea"

Highly reputed zoologists have reported that in TURDETANIA (region in the west of LA BETICA formed by HUELVA and parts of CORDOBA, MALAGA, CADIZ and SEVILLE) there were high quantities of stock, mainly sheep.

The professor APARICIO SANCHEZ, in a work about ovine ethnology, published immediately after the discovery of a Roman sarcophagus in CORDOBA in 1958, has reasserted the Spanish origin of the "trunk" from which the merino might have involved. Something similar happened with the so called CARNERO DE VILLAFRANQUINA (ram from Villafranquina) found in 1981, 15 km far from CORDOBA, which corresponds to a leaded bronze from the V and IV century BC it's a discovery which allows us to suppose that IBERIA was the birthplace of the merino breed.

At this point we could wonder: "Is the merino breed native to LA BETICA? Could it also be the case for the SPANISH WATER DOG? What is evident is that we are talking about one of the oldest dogs. These dogs have survived thanks to our shepherds and fishermen and that is due to their work in any environment where they have been.

This theory reference to a carnivore, the "Canis Familiaris Palustris", was associated to the people in the coasts of the North Sea. This savage dog involved to the form of the "Canis Palustris", which gave origin to a roginal "trunk" of Water Dogs that dispersed giving origin to the different breeds, we know at present such as the BARBET, in France, The PORTUGUESE WATER DOG in Portugal, The IRISH WATER SPANIEL in U.K. or The SPANISH WATER DOG in Spain.

Duhel, German cynologue, is in favour of the Asian origin of the Water Dogs. This theory is based on the fact that the dogs might have come with the Barbarians in different waves (Vandals, Alani, and so on), giving rise to a common "trunk" of Water Dogs from which breeds such as the PULI, or the KOMONDOR

This naturist believes in an African origin and talks about an archaic water dog, which was used by the tribes of the North of Africa for hunting in the water. It's a dog with curled hair, medium size and strong constitution. This dog is brought to Spain in 711, year of the Muslim invasion. These dogs were used by the BERBERS to lock after the sheep.

This theory has a foundation on the investigations made by JULIUS KLEIM. He asserts that the Spanish livestock have a large ancestry from the Arabian world, not just in the methods used during the Middle Ages in Spain for the way of choosing rams, but also in the way of shearing and cleaning the wool. There is also some influence in the vocabulary used when talking about sheep. For example: "RABEDAN" for the Arabians was the man in charge o the rams and "RABADAN" for the Spanish is the man in charge of the herds.